The Burlington teacher has penned an open letter proclaiming his innocence 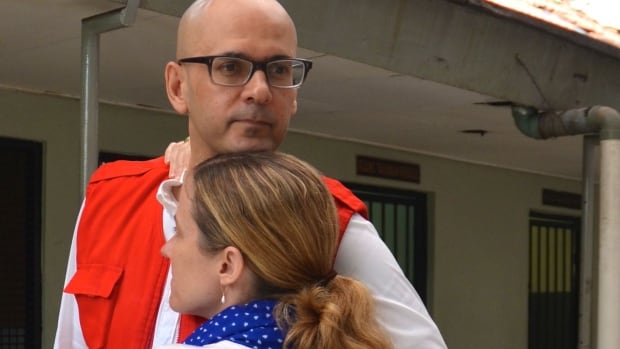 Neil Bantleman hugs his wife, Tracy, ahead of another day in court in Indonesia. (Victoria Botvin)

“I am innocent… we are all innocent. There has been a grave injustice and it is time for the truth to finally be told.”

This is how Neil Bantleman begins his latest handwritten letter, penned on Monday, from Lapas Cipinang Prison in Jakarta, Indonesia.

The teacher from Burlington, Ont. — who also worked as a teacher in Calgary — was convicted along with Indonesian teaching assistant Ferdinand Tjiong in 2014 on charges of abusing kindergarten students at the Jakarta Intercultural School (JIS), where the children of many expatriates, diplomats and wealthy Indonesians are enrolled.

Six cleaners at the Jakarta Intercultural School were also arrested and convicted of sexual assault charges. One man, a 27-year-old named Azwar, was pronounced dead within 24 hours of his arrest. Indonesian police said the man committed suicide by drinking bleach, but according to investigators at the CBC’s the fifth estate, a photo was obtained that shows the man’s face badly bruised and battered, and swollen even after death.

Neil’s brother, Guy Bantleman, has been updating the media on how his brother has been doing in prison. With the arrival of summer, most of Neil’s friends and colleagues have left Jakarta to spend the next few months in their home countries, he said. This has made Neil’s life even more difficult.

Bantleman was accused of assaulting three kindergarten-aged boys between January 2013 and March 2014.

He and Tjiong were originally sentenced to 10 years in prison, but in August 2015, after nearly a year behind bars, the pair were acquitted by a Jakarta High Court decision. During this time of freedom, however, Bantleman’s passport was revoked and he was not permitted to leave the country.

In February of this year, the Indonesian Supreme Court overturned the acquittal and Bantleman and Tjiong were arrested once again. A three-member panel judge panel made the decision and added an additional year on each of their sentences.

Under Indonesian law, both Bantleman and Tijong can challenge the sentence by filing for judicial review with the Supreme Court if they bring forward new evidence. Neil’s lawyers are currently preparing a draft of this review and expect to file the document in the coming months.

In a previous interview, Guy said the review will include new evidence uncovered by the CBC’s fifth estate investigation.

The Canadian government has been, and continues to be, proactive in dealing with this situation, Guy writes. The team supporting Neil has been in regular communication with Global Affairs.

“This decision is unjust, given the many grave irregularities throughout the various proceedings in this case and the fact that all evidence presented by the defence has systematically been rejected,” Dion said in a statement at the time.

Guy said the actions of the Canadian government and Global Affairs are making a difference, but he and his family won’t be completely satisfied until Neil is back home in Canada.

“When I found out that I have been accused of sexually abusing students at school, I was utterly shocked. I could not understand why someone I did not know would be so cruel to make false allegations against me,” Neil writes in his letter.

“I have never hurt a child or anyone in my life. Why a mother would want to have her child grow up believing he was sexually abused when in fact he was not, is beyond me,” said Bantleman.

One parent made up this story about how I abused her son, he said. “Just one parent. Accusations like this ruin you, it ruins your career and your reputation.”

The Australian Broadcasting Company has produced a two-part investigative report on Bantleman’s case. The episodes are available on YouTube.